Spoken from the Heart

I wrote this some years ago and always have it with me in my Bible.

Spoken from the Heart

I sometimes sit and listen and hope to hear from you

People say “God spoke you know” and it always puzzles me

My life is oh so silent – the only voice is me

Then I look back and I see my life, the way you’ve led me through

The things I’ve done, the way they’ve worked, it must be down to you

The miracle of healing, my husband and my home

And as I read the Bible, your words stand clear apart

So I know I can move forward, in your love there is no fear

You’re teaching me and leading me in your way, year after year

I realise now, you live in me and so direct my thoughts

Decisions that I make are by the Holy Spirit brought

How you fill us with your Holy Ghost, so we can always know

The Art of Paper

Sculpting by folding paper – this beautiful handiwork is by Cathie – who with careful precision has created some beautiful pieces of jewellery and ornament. 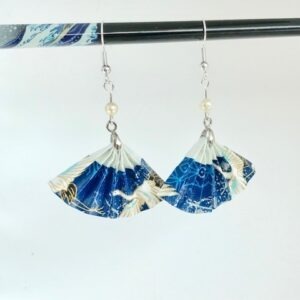 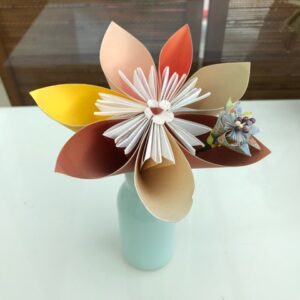 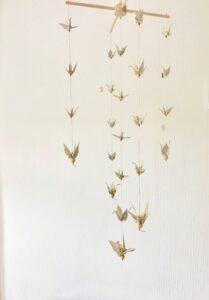 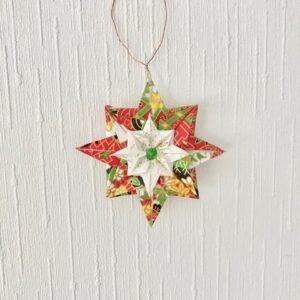 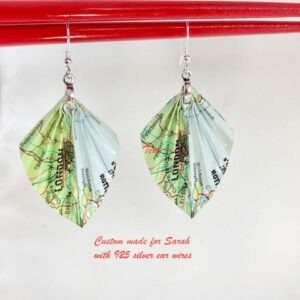 To see more of Cathie’s work, follow this link: etsy.com/uk/shop/OrigamiGemsDesigns

A song written and performed by Josh and Chelsey, during lockdown.

Our first ORIGINAL song 🙌🏼 Hopefully the first of many ‘For it is by grace you have been saved, through faith—and this is not from yourselves, it is the gift of God— not by works, so that no one can boast. For we are God’s handiwork, created in Christ Jesus to do good works, which God prepared in advance for us to do.’ ‭‭[Ephesians‬ ‭2:8-10‬]

The ‘At Home’ Series

These beautiful illustrations were done by Aleyna, while stuck at home fighting the tail-end of Coronavirus (after it visited their household).

The ‘At Home’ Series

Artistic Intervals for the Little Ones

Even the youngest have been being creative in lockdown. 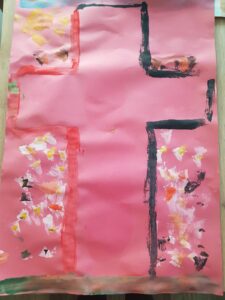 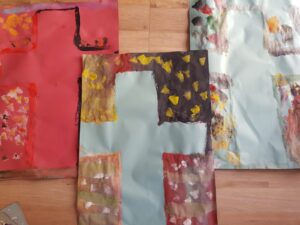 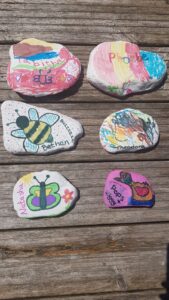 these girls have put their talents to the test. They thought they would bless their very own postman with the best ‘Thank yous’ any postie could hope for! 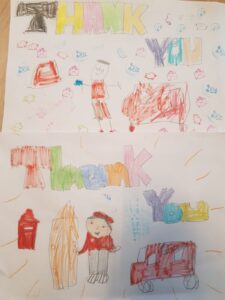 Captured by Tony in April 2020, during Lockdown. It’s so peaceful!

For some, having a birthday in lockdown has made this year extra special. People have gone to extraordinary lengths to make sure birthdays in lockdown are ones that won’t be forgotten. Here Kerry speaks for herself about her wonderful creation.

My name is Kerry and I am one of the team at Festival Church Chester.

One of the things I love to do in my spare time is to bake, and as it was my birthday last month, I decided to make my own lockdown birthday cake. I was excited about having the opportunity to make my own cake, with all the flavours I liked the best! 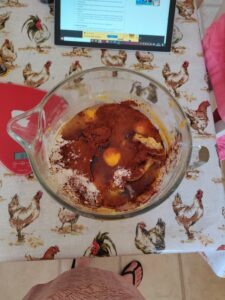 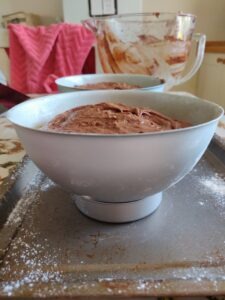 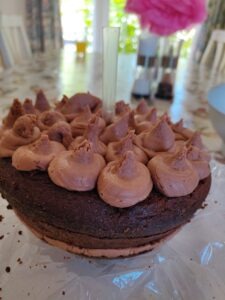 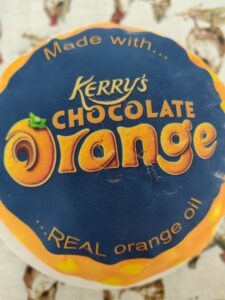 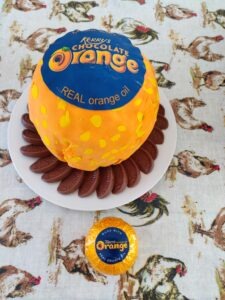 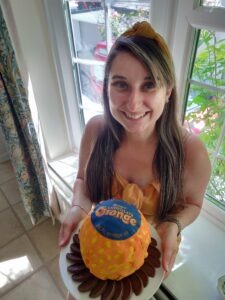 I used a smaller version of the chocolate orange cake and buttercream recipe from one of my favourite recipe sites, Jane’s Patisserie, which you can find the link for here: https://www.janespatisserie.com/2018/10/26/terrys-chocolate-orange-cake/

I baked the cake in two halves, let it cool, and then sliced each half again, to make four layers. I then used the chocolate orange buttercream to stick each half back together, and chilled. Then I stacked them with buttercream in between, and a plastic straw to stop the layers sliding off. I then crumb coated the whole cake with buttercream to help the icing stick.

I rolled out orange icing and rolled specks of yellow icing into it to create the texture, then added it to the cake – it wasn’t as neat as I had wanted it to be, but I have learned lessons for next time!

The final touch was a printed circle of icing that I designed on the computer, editing the Terry’s Chocolate orange logo to read “Kerry’s Chocolate Orange”. I ordered it from www.edibleprints.co.uk the week before, and it definitely gave the perfect finish to the cake!

If you’re looking to get baking, or to try a new recipe, I would definitely recommend www.janespatisserie.com

Being Outside in Lockdown

…but recently I have begun to appreciate its beauty.

Being outside has become something of a luxury during these weeks of lockdown. Stretching my legs, feeling the sun on my face and breathing in the fresh air has made me realise how I usually take these things for granted. Now that we are allowed to be outside for a little longer, going for a walk, a bike ride and even a run in the same day if we want, I have been taking the opportunity to appreciate the place where I live. With most shops, cafes and restaurants remaining closed except for takeaways, it’s an ideal time to wander the streets with a takeout coffee, noticing details we might usually overlook. And Chester doesn’t disappoint.

I should point out that I’m not an expert in the architecture or history of Chester, although I hope to learn more. But you only need to look at the buildings lining each street to know that this city is teeming with history, the past pouring out of its walls.

One of Chester’s most well-known assets is The Rows, the only example of two-tiered shopping in the world. Usually, I would dart up narrow steps hidden between shopfronts to shelter from the rain or visit specific places. But walking through the quiet streets, without the lure of coffee and cake, I have paid more attention to this unique construction. A feature which stopped me recently was the Three Old Arches on Upper Bridge Street, on the left-hand side as you face the cross. I must have seen these arches countless times, yet I’d never realised just how old they are. The date inscribed is 1274 AD and a blue plaque informs us that it is believed to be the oldest surviving shop frontage in England. A claim which I never realised Chester could boast.

Turning onto Watergate Street whilst continuing to peer up at the different architecture, you come to a distinct black and white timber frame building nestled between brick buildings. Carved into its exterior are intricate patterns along with the words ‘God’s providence is mine inheritance’ and higher up, the date 1652. A quick online search reveals that it was built in 1652, on the site of an earlier 13th Century construction. It is believed that the owners of the previous building escaped the plague that swept the city in 1647-48, which is why the building became known as ‘God’s Providence House’. A fascinating detail, but even without knowing this or anything else about the curious architecture of Chester’s city centre, it is enough to simply gaze up and admire it.

Adding to Chester’s charm are its cobbled streets. Normally, I take little notice of the ground under my feet but with far less to distract my attention, I’ve begun to take delight in the cobbles. Recently, I discovered St Mary’s Hill, a gloriously cobbled street running past St Mary’s Creative Space behind Castle Square. I hadn’t realised it was there. There’s also St Olave Street off Lower Bridge Street, White Friars off Upper Bridge Street and the entrance to Rufus Court off Northgate Street. But my favourite cobbles are those which cover Abbey Square, adding to the impression that you’ve stepped back in time as soon as you enter the archway.

Moving outwards, the canal towpath stretching below and away from the city is a pleasant path to wander along, although it can make socially distancing a challenge. Before, I would take the canal route to save time or avoid traffic, but recently I’ve begun to appreciate its beauty. Watching the ducks, walking by the still water, observing the changing landscapes. Passing Roman Walls, under cute bridges, alongside former mills which reveal the industrial side of Chester’s past and then onto cosy cottages and the Cheshire countryside, it’s worth a walk. Recently, I was below Northgate Bridge, looking up instead of ahead, and I noticed a narrow bridge. It seemed wide enough for one person, and looked crude and basic, without decoration or railings. I’m sure many people have already seen this crossing, but it was the first time I’d noticed it, since I wasn’t hurrying to be somewhere else. Again, I looked online and discovered that this small overpass is known as the Bridge of Sighs. It was built in the late 1700s to allow condemned prisoners from Northgate Jail to cross into the chapel of the Bluecoat School and take the last rites before they were executed. I was struck by this small detail of Chester’s past, preserved in its brickwork and adding to the fabric of the city. Undoubtedly there will be many others, blending into the scenery we pass daily.

Other features that have caught my attention during these wanderings include a plaque marking the site of a leprosy hospital in Boughton, the Victorian public baths on Union Street and the Royal Infirmary located on St Martin’s Way. But I didn’t set out to write a guide to the city and this is by no means an exhaustive list of the places you need to see. Simply, these small discoveries during this strange time remind me that we get a lot more from our surroundings when we take the time to look a bit closer. And the city we call home has so much to discover, hidden in its walls.